We got a charge at End Point seeing an article on the front page of The New York Times website this last Sunday about the @america cultural center exhibit the US State Department opened in Indonesia this last December. The article features the Liquid Galaxy that End Point installed on Google’s behalf there. There was no mention of End Point, but heck, we’re only a few clicks away from the Liquid Galaxy link in the article!:

The article also appeared on page A6 of the publication’s New York print edition, leading off the International Section of the paper with a big 9” by 6” color photo with the Liquid Galaxy in the background—​the same photo that appears on the website and at the top of this blog posting.

Kiel Christofferson made the trip from New York to Jakarta to do the installation. After he installed the Liquid Galaxy in the exhibition space he moved it with local help to a ball room nearby where there was a State Department gala for the opening of @america. Kiel got dressed up in black (not so unusual for him) and staffed the booth to make sure there were no glitches for the event, then he oversaw the move back to home base.

This Liquid Galaxy was a bit different from past ones for us since Jakarta uses 230 volt power, so there were a few equipment differences from what we’d used before. Also, it ended up being a seven section system rather than eight sections because space at the exhibition is tight and setting up just seven sections provided the clearance needed for wheelchairs in the area around the Liquid Galaxy to conform with US ADA requirements.

On an international project like this it wasn’t surprising that there were extra bureaucratic and logistical issues to be worked through and many odd-hours phone calls and emails. Ultimately the project had to be delivered on a very tight timeline. It was certainly a pleasure working with Google and with the embassy and its contractors in Jakarta on the project. There were a lot of knowledgeable and committed people who stepped up to help get the Liquid Galaxy set up in time for the @america opening. 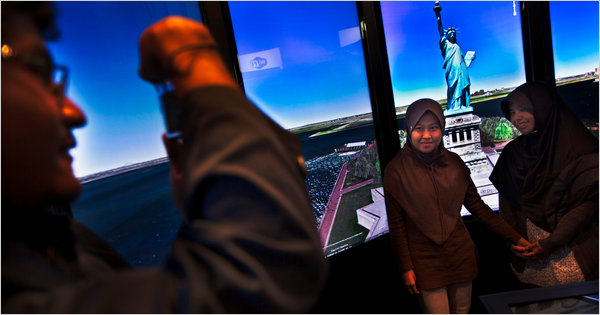