Ecommerce From the Experts

We’ve been selling on the Internet since dial-up.

Our custom solutions bring intelligence to your organization.

Our project managers and engineers can take over your existing project and bring new life to your business.

We build secure infrastructure that scales fast and flawlessly.

A Little Less of the Middle 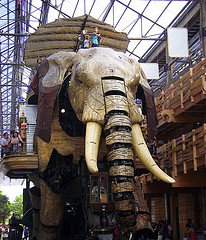 I’ve been meaning to exercise a bit more. You know, just to keep the mid section nice and trim. But getting into that habit doesn’t seem to be so easy. Trimming middleware from an app, that’s something that can catch my attention.

Something that caught my eye recently is a couple recent commits to Postgres 9.2 that adds a JSON data type. Or more specifically, the second commit that adds a couple handy output functions: array_to_json() and row_to_json(). If you want to try it out on 9.1, those have been made available as a backported extension.

Lately I’ve been doing a bit of work with jQuery, using it for AJAX-y stuff but passing JSON around instead. (AJAJ?) And traditionally that involves something in between the database and the client rewriting rows from one format to another. Not that it’s all that difficult; for example, in Python it’s a simple module call:

... assuming I don’t have any columns needing processing: TypeError: datetime.datetime(2012, 3, 09, 18, 34, 20, 730250, tzinfo=psycopg2.tz.FixedOffsetTimezone(offset=0, name=None)) is not JSON serializable Similarly in PHP I can stitch together a JSON array to pass back to the front end:

Now I can trim that out, and embed the encoding right into the database query:

Notice the use of the row-type reference to the table itself after the SELECT, rather than just a single column. This outputs:

Compare that to the output from json_encode() above, where the database driver treated everything as a string, even the page_id integer. The other difference is the Postgres code doesn’t do any quoting on Unicode characters:

I’m a bit on the fence about whether it’s a real replacement for doing it in middleware, especially in some web use cases where you typically want to do things like anti-XSS type processing on some fields before sending them off to a browser somewhere. Besides, at the moment at least, there’s no built-in way to break JSON back apart in the database. But I’m sure there’s some places getting direct JSON is helpful, and it’s certainly an interesting start.